Our mastitis bolus Mammitop Small is a slow-release 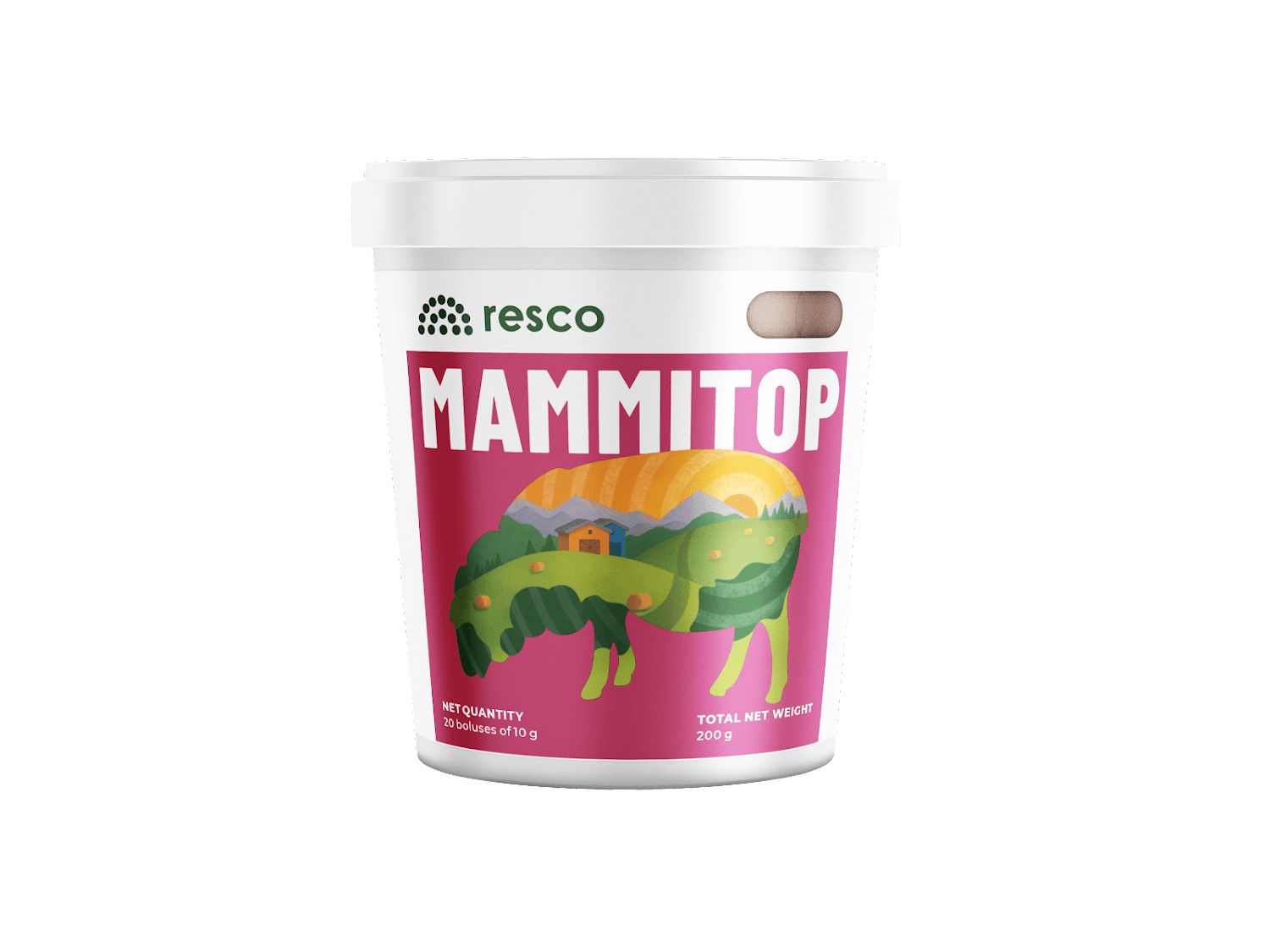 sheep supplement that is developed to prevent the development of clinical mastitis after lambing or in situations with increasing cell count. It has a slow release of 21 days. A trial was conducted at the University of Leon in Spain. 52 sheep received a Mammitop Small bolus and 53 sheep were in the control group. The trial looked at the evolution of milk production, cheese production, somatic cell count, and urea in milk.

There’s no significant difference between both groups concerning milk production. The initial difference (random) of the control group (C blue) and the treated group (T red) is kept during the experiment, except in the middle of the trial period. 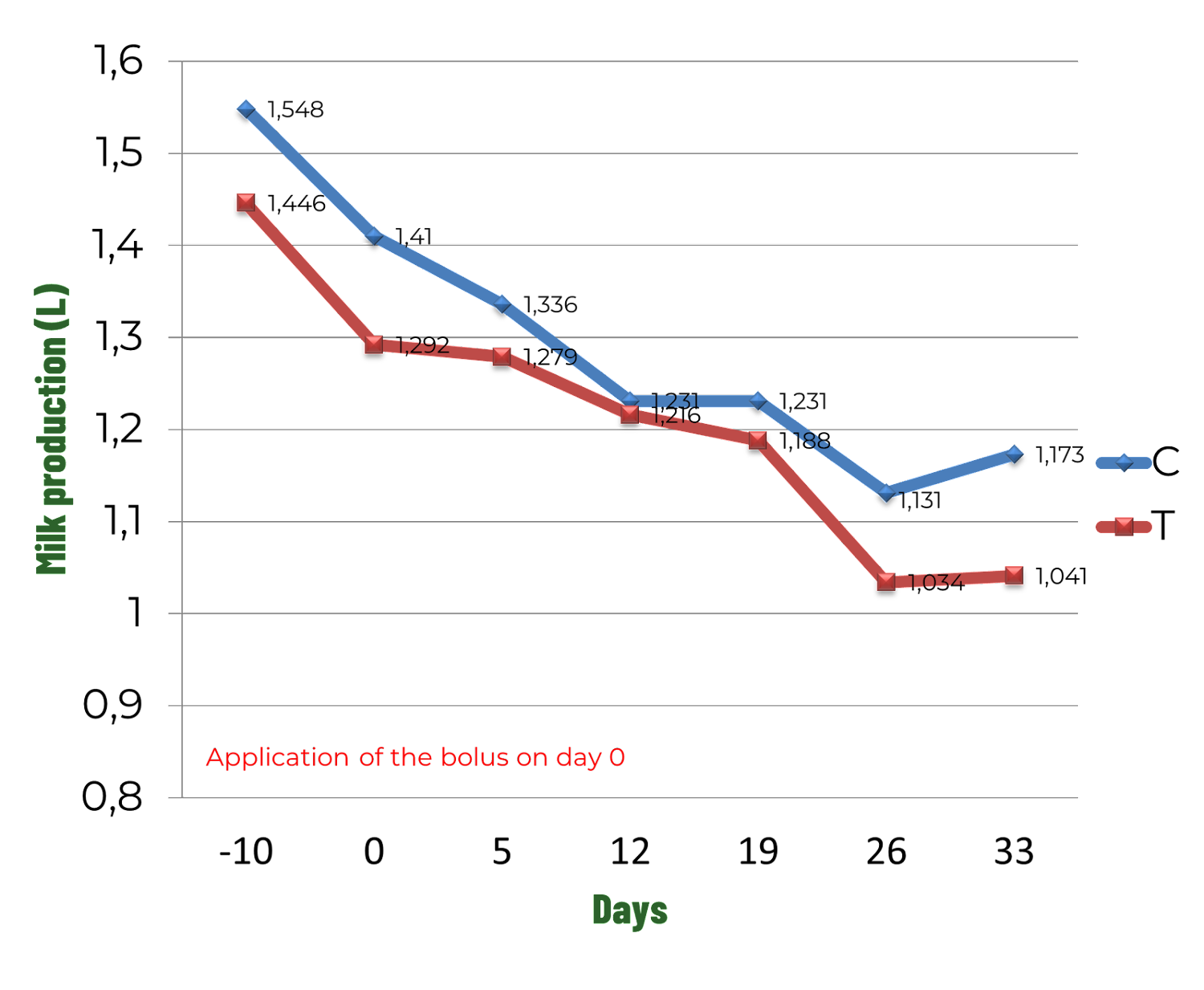 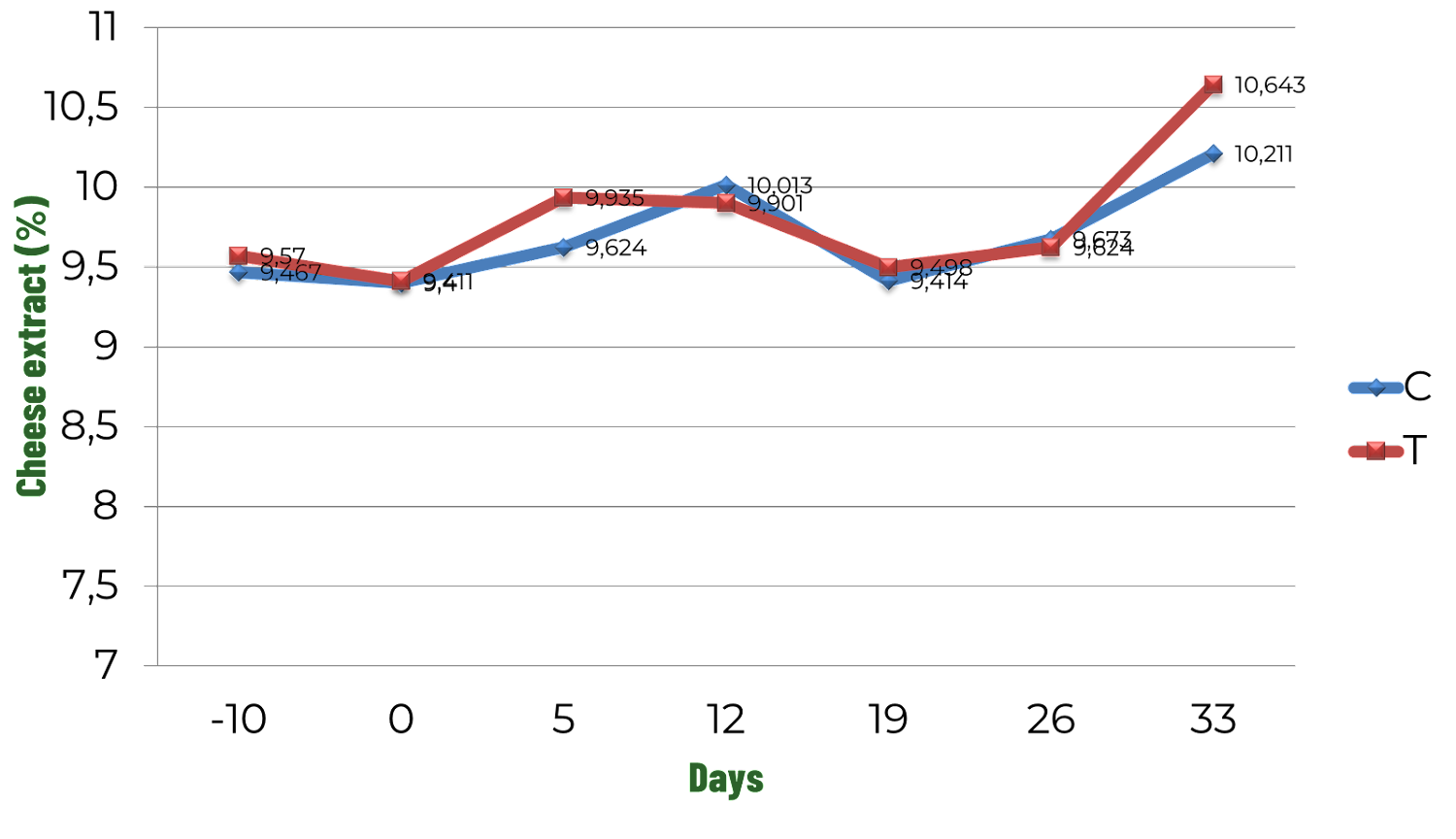 From day 19 an event is happening that is expressed by all animals. As we know the direct influence of ambient temperature on somatic cell count, it is probable that this is the explication. Also, day 19 corresponded with the 24th of June (summer).  Either way, the event affects both groups in the same way. Still, the difference in favour of the treated sheep is maintained. 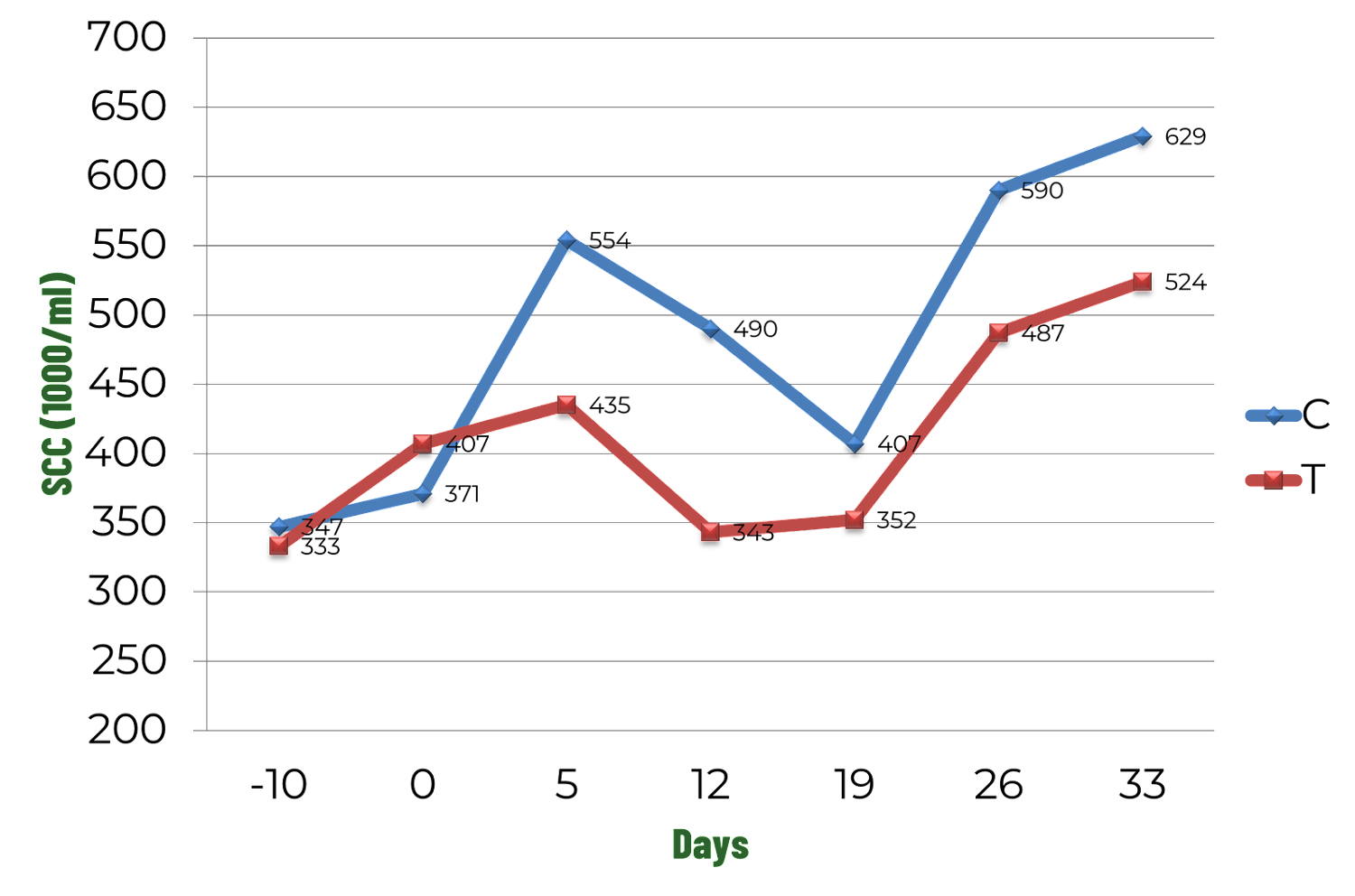 Evolution of urea in milk (mmol/L)

The quantity of urea in milk is related to the efficiency of retaining Nitrogen (protein) from the diet. A higher level means bad digestion of the protein which will end up being transformed into ammonium. This will be transformed into urea. This is to be considered an energetic loss and an economical loss. There is a lack of statistical analysis, but the tendency is that the control group has a higher content of urea than the treated group.

Like in the previous case, something happens from day 19, that changes the curve for both groups. It is most probable that the animals are readjusting their metabolism in adaptation to the increasing temperature. This also influences energy and protein metabolism. 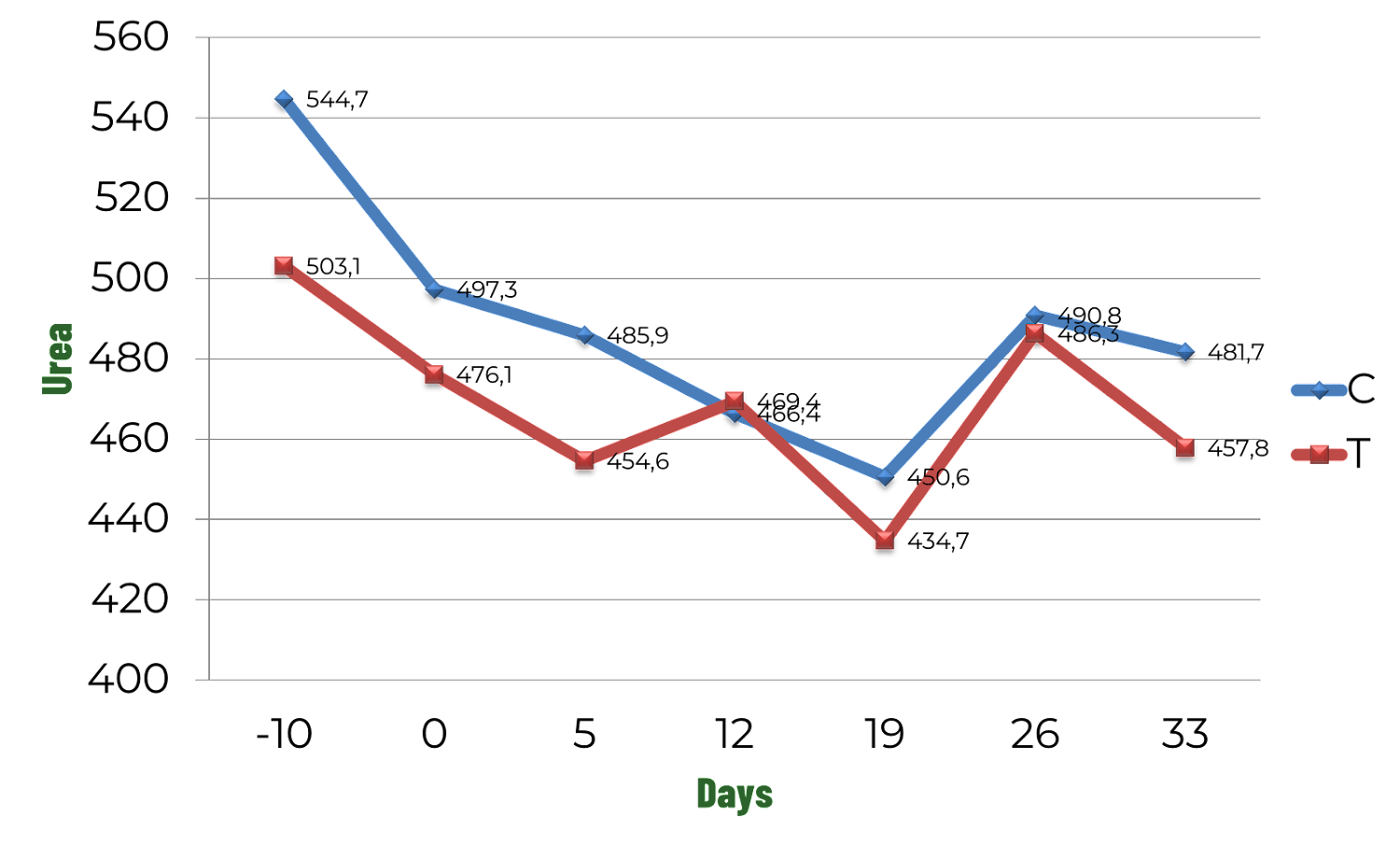 In general, a positive effect of the bolus on the treated sheep is proven.

We can also conclude that the bolus has no negative impact on milk or cheese production.

By observation of the individual numbers, we could also see 2 different effects: 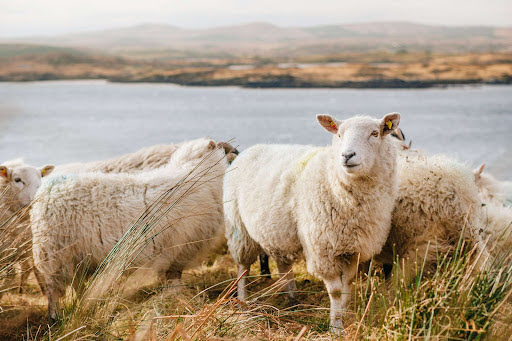